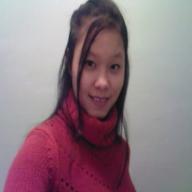 I'm looking for friendships from all people around the world. Who knows that I might drop in your country. I think is nice to have friends from every world's corner. Still looking for myself identity, try to find clarity and stay as good as innocent flower.