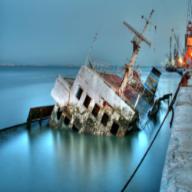 Too young to be a curmudgeon, too old to be an underwear model... the wonderful thing about getting older is the life experiences it allows for. Anyhow, I started out as a commercial fishing boat owner, and became a marine biologist. I ended up back at the wheel later on, and these days I split my time as captain of a research ship and first mate of an oil tanker. It's been good.