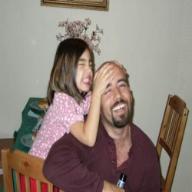 I'm not your typical guy. I've been married of 12 years and have two children. Been told that I a great father and husband. I enjoy cooking and am a regular Mr. Fix-it around the house: plumbing, flooring, tile work. Have a rather large library and a rather sick sense of humor. Any and all of my question are meant to make you think or illect a response. Take caer and enjoy.