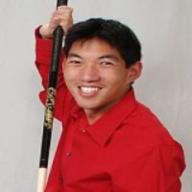 I'm a world-ranked trick shot artist in the San Francisco, CA area. My website has videos of some great shots along with tutorials and instructions so *you* can learn how to shoot them too! I also have an interactive chat set up on my site if you have questions, or you can always email me. http://www.trickshottim.com