Awareness of Jehovah's Witnesses. Are you aware of the harm they cause?

I am a Jehovah's Witness by name only.

I can't leave because of their shunning practices.

They will take all of my family away from me.

So to combat the watchtower I am here to tell you what they do.

Public awareness has escaped the watchtower for a very long time, it's now going to explode in their faces as many like me are forced to a wall. To enforce change we must be vocal.

The act of shunning is a disgrace, parents, children extended family will have nothing to do with you if you choose to leave the religion.

Don't be fooled by their polite law abiding attitude, it's a facade for what they really think if non Jws.

Non Jws are considered worldly, they state if you don't serve Jehovah you are serving Satan, you will be destroyed at Armageddon.

Their website uses trick words like " we believe non Jws who have died before Armageddon will be resurrected what they fail to tell you is they also believe that if your not a JW at the time of their Armageddon you will be killed.

They have a 2 witness rule for peadophilia. So if a child goes to the Elders/ pastors and tells them of the abuse, if there are no 2 witnesses they will do nothing about it. They also will not report it to authorities if its not mandatory In their region, and they used to discourage victims from

Going to the police and if they did the victims were disfellowshipped for rebellion.

These also means that people knocking on your Door could be pedophiles.

We have jehovahs witnesses who will come on here and tell you I am / we are lying, we are mentally diseased. Now I put this question to you, would you call the poor victims of child sex abuse in the Catholic Church as mentally diseased or people with in the church speaking out as telling untruths?

It's time to fight and raise public awareness of Watchtower,

People who are studying with this cult please explore their history and evil policies. 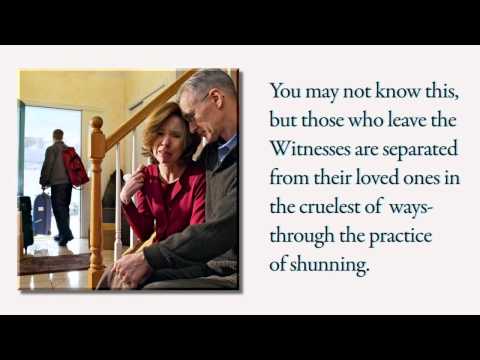 Ps Jehovah's witnesses don't bother blocking and unblocking me. We know what you do. Unlike you I allow all people the opportunity to answer and comment unlike you guys. You block anyone who disagrees with your faith not allowing unbiased comments.

Do you not know that the Worldlies are not stupid and see your actions.

Should the policy of “shunning” be considered a “loving” form of spiritual discipline? We read in the Bible that spiritual discipline is always to be accompanied by loving attempts of reconciliation (Matthew 18:15-17; 2 Corinthians 2:6-8). The communication lines are to be kept open at all times (2 Thessalonians 3:6, 14-15) and the repentant sinner is to be welcomed back immediately without a long-trial period of performance (Luke 15:18-23).

The council at 2 John is about people denying that Jesus was not the Messiah. It does not apply to;

Questioning anything the Governing Body says;

Going to another church

speaking to others who may be disfellowshipped;

Strange that Witnesses do not apply those words with atheists, Muslims, Jews or anyone else who does not believe Jesus was the Messiah. They will work and spe

And speak with non believers. Ironic

@Fruitages of the spirit or any Jws. Let me twist this around for you.

Just say your family are Catholic and you wanted to convert to jehovahs witnesses, lets say the Catholics applied the same watchtower rules, your family need to shun you till you come to the catholic faith. Speaking as a JW we would say to you that Satan is causing obstacles and satan is testing you.

How about we apply this to those of us who have found out watchtower is a lie and we want to leave, there is no difference it's just a switch around.

Your logic and your scripture twisting to suit your beliefs can be twisted the other way around,

Another one bites the dust, fruitages of the spirit deleted his comments.

Goes to show how you can easily poke holes through their beliefs and their harmful practices.

@ John 1 thank you showing the Jehovah's Witness true thoughts!! This is exactly what I want the world to see. The inhumane indoctrination you have been brainwashed with. How you think it's ok in the name of religion that Shunning is ok and your total non emotion to hurt broken families and the many suicides from this harmful policy.

Infact your comment is indeed going to be a great still screen shot for my awareness on the evil of the Watchtower and Tract society. Thank you for your contribution In bringing unfavorable attention to your cult ;)

@ i was Tom , I don't need to screen shot you dude. Just trace your comments and your inhumane nature shows itself . You believe in the barbaric shunning rules.

This is your comment on shunning on another answer:

I think all churches should bring correction and shunning back. People use to care more about morals"

Just to clarify to you I have not committed any moral sins. I just don't believe the watchtower are the truth and want to leave their cult.

I am guessing your not a family man and if you do I feel very sorry for your children if you have such an awful attitude.

And dude I can whine as much as I want ;) you don't have to listen or read.

Ps you do realise that leaving the watchtower cult equates to leaving God and that I am shunned by all.

I was baptised as a child.

As I said if you don't like to read whining posts don't read them, but you seem to love whining over them.

And by the way dude if your not a JW yet then I suggest you to become one. It seems to suit your personality.

From one whiner to another cheers.

Your the king of whiners dude.

Your Name says it all. Jekyll and Hyde complex fits you well

All I can say thank goodness I have love and compassion for fellow Humsm beings suffering because of man made religious beliefs that are barbaric.

And thank goodness my children will always be loved and never shunned because a publishing company dictates it.

Noticed you have a few you tend to follow and pick on.

Gees you really are bitter, hey ? Especially since you don't seem to be from a cult,